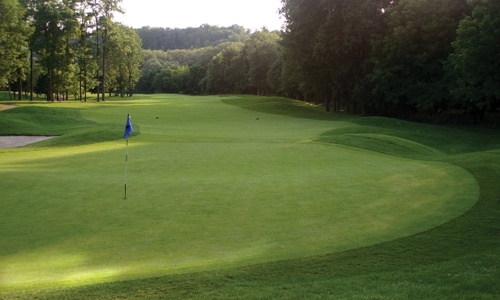 KITCHENER, ON - Deer Ridge Golf Club will host the 2013 and 2014 Titleist & FootJoy PGA of Ontario Championship as the tournament starts a rotation of host sites.

"With a terrific new venue we expect a full field of 144 golfers and a highly competitive championship as we shift to Deer Ridge after a decade at Barrie Country Club," says Kevin Purcell, Executive Director, PGA of Ontario. The championship will be hosted by Deer Ridge GC for the next two years and then move to St. Catharines G&CC for 2015 and 2016.

The two-day Titleist & FootJoy PGA of Ontario Championship will be played July 15-16. It is the longest running tournament in the history of the Ontario PGA dating back to 1939 with past champions including; Moe Norman, George Knudson, Al Balding, Ken Tarling, Danny King and defending champ Brian Hadley of Thames Valley Golf Club.

"At Titleist & FootJoy, we have an unwavering commitment to our products and the people who play them," says Ted Manning, President of Acushnet Canada, Titleist & FootJoy. "The longstanding partnership we share with the PGA of Ontario and its members is a bond that we hold in very high regard. We are excited to be adding another chapter to the history and tradition of great PGA of Ontario champions this summer. Our sincere thanks go out to Kevin O'Donnell and to the members of Deer Ridge for their generous support in hosting the championship. We look forward to seeing you in July!"

Deer Ridge GC, a secluded private club with an 18-hole Tom McBroom designed layout that dates back to 1991, has had a major facelift over the last three years and members are now ready to showcase the course that plays through majestic Carolinian Forest and the rambling Grand River Watershed.

"Deer Ridge has been positioned as an equity players club where golf and the traditions of the game have always been the main focus for our 400 members," says Kevin O'Donnell, General Manager & Head Golf Professional at Deer Ridge Golf Club. "So to be able to open up our doors and invite members of the PGA of Ontario to play in their provincial champion is a perfect fit for the club."

McBroom, who says it's hard to believe it has been 20-plus years since he designed Deer Ridge, has completely renovated the greens, surrounds, bunkers and added collection areas on Nos. 4, 6, 11 and 13 giving the course a new look with more visual impact and additional shot options.

They altered the contours of a couple of greens and completely reseeded them with a new super dwarf bent grass that is very dense and resistant to Poa and other infestations. Along the way, they also refinished the fairway bunkers with flashier faces and added 200 yards of length with new tees on Nos. 4, 8, 11, 13, 15, 18 to get the course to 7,215 yards from the back tees.

"The course is definitely much more eye-popping now. It's more multi-dimensional and the shot values are very strong," McBroom says, noting that they are planning on adding more roll off areas in the near future on other holes.

The golf professionals who tee it up at Deer Ridge GC for the PGA of Ontario Championship will also have the opportunity to test out the club's new practice area that is scheduled to open in mid-June. Along with new putting and chipping greens, bunkering and mounding has been added to the facility to allow members to work on all aspects of their game.