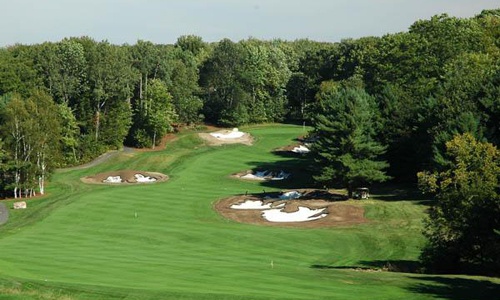 The blasting is over, the heavy machinery has gone and all signs of construction have been left behind as the “new” Port Carling Golf & Country Club is revealed to the members this spring. With over $5,000,000 in capital improvements since Michael DeGroote purchased the club in 2007, Port Carling has enjoyed a major facelift that saw every green re-surfaced; all of the bunkers dug out, re-shaped and filled with new sand; a new ground water retention pond added and several holes altered significantly.

Architect Tom McBroom completed the updates to his first solo project, one that he calls the “toughest 6,400 yard par-70 layout in Canada.” The project started in the fall of 2007 with the re-contouring of the first hole, a 592-yard par-5, by bringing in 25,000 tons of sand and raising the entire fairway an average of four feet to create a 3% grade off the centre for drainage. That was followed in the spring and summer of 2008 with the rebuilding of all existing sand traps and strategically adding several new ones.


One of the difficulties of building in Muskoka with all of the underlying rock is how to deal with water drainage, particularly when heavy rains can leave the course soaked with nowhere for it to go. Superintendent Justin Heptinstall, who oversaw all of the construction projects, indicates that the one he’s most proud of is the new method for collecting and re-using groundwater on the property for which the Club received recognition in the form of a Communities in Bloom award.

With a little over 200 of Port Carling’s 275-acre property draining through the lowest point on the golf course to Lake Muskoka, it was decided that the best way to handle ground water was to build a pond at the dogleg of the 12th hole for catching the run-off. That’s now complete and the 32 foot waterfall is easily seen from the road by everyone travelling through the town of Port Carling. From the new pond, 400 feet of underground pipe was installed back uphill to the club’s holding and irrigation ponds with a float system at all locations to monitor water levels and use daily. According to Heptinstall, it works like a dream and should be able to handle even the wettest seasons.

When it came time to determine how to resurface the Port Carling greens, Heptinstall and McBroom opted for Manderley’s A4 Premium Bentgrass sod and ordered 105,000 square feet of soil free A4 in large roll format. Once a curiosity, soil free turfgrass is now widely accepted as the de facto standard for establishing turf when a rapid turnaround is needed that meets USGA specifications.

“We began the greens renovations last October and were on an extremely aggressive schedule, changing out two to three greens per day in order to beat the looming frost in November. With Manderley’s crew and our staff we were able to finish the job in less than three weeks, just in time for our first snowfall,” said Heptinstall.

He went on to explain that the use of soil-based sod can lead to layering and drainage problems that inevitably negate any time or cost saving advantages. By washing away the soil layer from the sod these problems can be mitigated. In addition, soil free sod has consistently demonstrated enhanced rooting capabilities that can result in as much as a 260 percent increase in root biomass. The rapid root growth results in a dense mat of turf developing quickly, resulting in a much desired uniform and fast putting surface.

For added protection over the winter months, Heptinstall and his staff sprayed the sod with a systemic fungicide right at the Manderley farm before the turfgrass was cut and washed.

“The process went a lot smoother than I had anticipated and I attribute that to having the right people on the project from start to finish. However, if I had it to do all over again, the only thing I might change would be the timing,” mused Heptinstall. “Our weather-imposed deadline was unpredictable and more than a bit nerve racking.”

Other projects completed in this extensive Port Carling reno included clearing underbrush and soil from the granite to expose the rock for aesthetic purposes; opening up the views on a number of holes by removing trees and; raising and recontouring a couple of fairways that had previously suffered from poor drainage. All of the above will be greatly appreciated by members and guests, however, in overall visual impact, they will pale in significance to the massive change to the fourth hole. The “Wall” is gone!

Anyone who has played Port Carling will remember the fourth as an impossibly tough par-4 that played from an elevated tee across a gully into a very steep hill. Only the longest hitters could carry enough hill to have a remote chance of a semi-flat lie for the long second shot into a crazy three-tiered green. After blasting 28,000 tons of rock, adding 11,000 tons of sand and 15 eighteen-wheelers of sod, the fourth hole has been softened enough so that it is now just a tough par-4 but not impossibly so. In rebuilding the green, McBroom allowed just enough slope to be receptive to the long approaches while still making putting a challenge.

When asked if there are more projects in the works for Port Carling, General Manager Wayne Middaugh just smiles and says, “we’ve spent a lot of money and made huge improvements since Michael DeGroote bought the course. For now, we’re just going to let the members enjoy the course.”

Twenty years ago, golf course architect Thomas McBroom scraped dirt off rock at Port Carling to launch a remarkable string of exceptional Muskoka courses that now number seven in total. During his career McBroom has won numerous design awards and accolades from over 50 golf courses worldwide but his Muskoka courses always stand out for their brilliant routing and harmonization with the native rock, forests and wetlands.

How hard was it to look at Port Carling with a critical eye knowing you were critiquing yourself?
It wasn’t like I had left Port Carling twenty years ago and not gone back, so I was familiar with most of the issues. The great thing about working with Michael DeGroote was that he had a vision for what he wanted the club to be and the money to back that up.

The biggest advantage I had in assessing my own work was twenty years of experience and my other Muskoka courses where I had experimented with things that worked well. Some of the other things we did here like raising fairways for better drainage and adding the collection pond on #12 were improvements that had been discussed before but had never been tackled by the previous owner.

How difficult is it to build in Muskoka?
Obviously there are many more environmental issues that come into play here than a city course or one built on farm land. A combination of severe elevation changes, wetlands, drainage issues, dense forest and of course rock, make it a real challenge. I think all of my Muskoka designs have utilized the natural elements to best advantage, yet offered a playability and enjoyment that works.

Rock is a key element in Muskoka. What’s your strategy for using it?
I was one of the first to really utilize the rock in both an aesthetic and a strategic way. I like it to be very visible which creates some intimidation but in fact, unless you hit a really bad shot, it’s rarely in play. Rock adds drama. The fifth hole here at Port Carling is a great example. The tee shot has to carry a deep ravine which used to be filled with bushes and undergrowth. We cleared away a lot of that undergrowth to expose the rock. It didn’t really change the hole at all but the sight of that rock face on the opposite side introduces added drama. The same goes for the rock face on the 13th. It’s totally out of play but now that some trees have been removed, it’s quite stunning.

The new bunkering here is a marked change from the earlier version. What was the rationale for that?
The old bunkers were more of a style I used at the beginning of my career, softer, a bit more benign. The new bunkers include raised lips, ragged edges and are more visible off the tee and approaching the green. That adds a mental challenge and makes the hole look more dramatic.

The change to the fourth hole is very striking. What were your thoughts on the original design and the new one?
First I have to say that the hole was never designed to play the way it did. Initially everybody played from the lower tee so the ball carried farther up the hill and left a short to medium approach to the green. The worst of the steep hill or “the Wall” in front of you was never much in play. The former owner decided to add some length so he built a back tee that meant only the big hitters could over the Wall. For most members, they were left such a long second shot that many couldn’t reach the green. By blasting out the rock and softening the hill, it now plays fairer from all the tees. The drainage is also much better so you’re not plugging into the hill. It’s still a tough hole but not unfair.