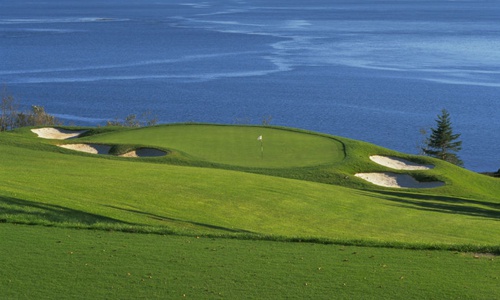 Through a magical mix of spectacular geography and artful design, Canada’s signature par threes often reflect not just the character of golf at a particular course, but of an entire region of the country.

Stanley Thompson, an acknowledged master of the short hole, was said to have always started with his par threes when designing a golf course. Once Canada’s most revered golf architect felt he’d aced them, the rest of the routing flowed almost effortlessly.

Thompson’s conviction that par threes are the building blocks of superior golf course design is shared by such top modern Canadian architects as Tom McBroom, Doug Carrick, Graham Cooke and Les Furber. “When done properly, a par three burns a distinct image in your brain,” McBroom says. “It’s the perfect postcard memory a golfer takes home after his round.”

Talismanic symbols of the Canadian game, signature par threes often reflect not just the character of golf at a particular course, but of an entire region of the country. For some, the 211-yard 14th hole that thrusts into the mist of Howe Sound at British Columbia’s Furry Creek Golf and Country Club is West Coast golf at its most breathtaking. Not far from Regina, the 176-yard second hole of the Deer Valley Golf and Estates course offers an unforgettable vista of valley dunes and stands of aspen against an endless prairie sky. And from the moment of its unveiling in 2000, the short downhill 12th hole at Algonquin Golf Course in New Brunswick’s St. Andrews-by-the-Sea, with its sweeping view across Passamaquoddy Bay to the state of Maine, became one of the East Coast’s most photographed holes. “This is such a geographically beautiful country that there are endless possibilities for really dramatic short holes,” Carrick says. “Natural theatre like waterfalls, river rapids and mountain canyons are ideally suited for par threes. It’s a real treat for a golfer when he can stand on a tee and take in that kind of spectacular scenery at a glance.”

No matter how beautiful, a par three must, like all golf holes, be playable for every calibre of golfer before it can truly be described as great. Challenging but never unfair, the hole will test scratch golfers, yet not destroy the shaky confidence of high-handicappers. It should always demand careful thought, and reward those who think clearly.

As with so many other aspects of Canadian golf course design, Stanley Thompson set the standard for par threes. He is admired for many of his short holes, but most of all for the Banff Springs Golf Course’s legendary Devil’s Cauldron. From an elevated tee, golfers hit over an impossibly picturesque glacial lake to a small sloping and heavily bunkered green set in the shadow of Mount Rundle.

Architects and untold numbers of golfers have journeyed to the Devil’s Cauldron to marvel at Thompson’s artistry ever since its unveiling in 1929. “It’s an absolutely brilliant hole — and so Canadian,” Graham Cooke says. “You just know you couldn’t be anywhere in the world but Canada when you play the Cauldron.”

Seven decades passed before another hole emerged to challenge the Devil’s Cauldron’s status as the most talked about par three in the land.

The newcomer was Cliffhanger, the aptly named sixth hole at British Columbia’s Doug Carrick-designed Greywolf Golf Course, near the mountain town of Invermere. Cliffhanger features a long gut-churning carry over the sheer drop of Hopeful Canyon to a green perched along the edges of vertical rock cliffs. Rugged peaks tower in every direction, evergreens strain toward the sky, and from the green, golfers can see for kilometres down an incredibly beautiful mountain valley. All that’s missing from this iconic Canadian setting is a Mountie standing on guard at the tee. “Often the most dramatic par threes, such as Cliffhanger, emerge from out of the landscape almost of their own accord, as if they were simply meant to be,” Carrick says. “As proud as I am of it, Cliffhanger is mostly Mother Nature’s creation.”

Thompson, together with such other towering architects from golf’s past asDonald Ross, Alister Mackenzie andRobert Trent Jones, established a blueprint for par threes largely followed to this day. Always they strove for an entertaining mix in their layouts, each par three ideally requiring the golfer to use a different club, as well as to confront an entirely new challenge. Hole lengths varied from long to short to medium, and the ideal routing placed the par threes in different directions so that players had to factor in the wind’s direction.

Two typical par-three styles evolved: shorter holes of perhaps no more than 120 yards, but so heavily bunkered that a misplayed tee shot might easily end in a bogey or worse; and the less common and generally more straightforward colossus of 220 yards or more. Thompson, especially, liked to build elevated tees whenever the landscape permitted to enable golfers to better admire the scenery.

On the drawing board of a talented architect, even the shortest hole can be stiffened to challenge any golfer. Of all Canada’s shorter par threes, architects agree that one of the best is Stanley Thompson’s Bad Baby, the 15th hole at Jasper Park Lodge Golf Course. Playing 138 yards from the tips, Bad Baby features a 14-yard-wide green situated atop a steep-sided mound with bunkers to the left. Miss the green and a scorecard disaster often results. Shorter par threes are made difficult by creative bunkering, by adding tiers, bumps, hollows and run-offs to the green, and by the green’s siting along the line of approach. As a general rule, the longer the par three, the less penal the bunkering and the more receptive the green. On par threes of over 200 yards, golfers are almost always able to bump-and-run their shots onto putting surfaces left open at the front in the classic style.

Of course, nothing stiffens the playability of a par three — or any hole — like a well-positioned water hazard. Architects reworking a flat or otherwise uninteresting landscape often use them to inject the essential element of drama into the setting. The key to designing par threes that incorporate water is the careful positioning of tee blocks to ensure that no golfer is ever asked to hit a shot that he can’t possibly hope to accomplish.

What many architects regard as an unfair use of water — at least for the majority of golfers — is the type of heavily penal island green made popular by American architect Pete Dye’s famous par-three 17th hole at Florida’s TPC Sawgrass. Built without a single bail-out zone and especially treacherous in heavy winds, the hole is target golf at its most unforgiving.

Unveiled in 1980, Sawgrass’s 17th helped usher in a decade when brutally difficult golf holes and courses became the rage. For a time, it seemed like every new course featured a par-three island green. Some designers, including Jack Nicklaus, drove high-handicappers to distraction by also installing them on short par fours and par fives. But even during the height of the insanity, most architects believed that an island green on anything but a par three, where the distance and angle of approach were clearly defined, was downright unsporting. Stanley Thompson’s Devil’s Cauldron at Banff Springs Golf Course has been a totemic symbol of the Canadian game since 1929. (Image: Fairmont)

“Thankfully, golf architecture has gotten away from that heavily penal type of design,” McBroom says. “I’ve never designed an island green and I never will. I think they’re unfair for high-handicappers. But today, at least, designers who do build them almost always give golfers bailout areas to ensure they have a fighting chance.”

Better architects also express particular disdain for uphill, blind par threes, where the golfer is unable to see the hole from the teeing area. “Imagine sinking a hole-in-one and not being able to watch the ball drop into the cup,” Les Furber says indignantly. “You’d be missing out on one of the most exciting moments of your golfing life.”

Stanley Thompson, Canada’s undisputed master of the short hole, eschewed deceptive routing and hidden hazards when building his par threes. Never did he permit his design to impose on the perfection of the natural setting. Rather, he created with the subtle strokes of a painter, bringing the artistic elements of balance, harmony and proportion to his work.

“Thompson was the model for us all,” Cooke says. “Just look at his Devil’s Cauldron. Sheer perfection.”