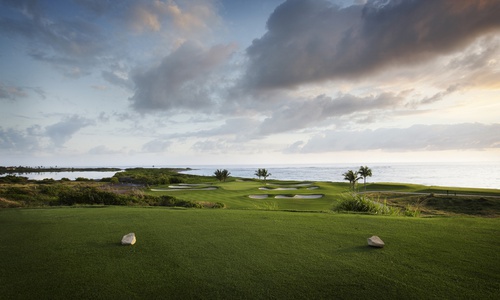 Winter got you down? Grab the sticks and head to the sunny Caribbean, where Pete Dye, Greg Norman, Tom McBroom and other top architects have been busy revamping existing courses and building new showpieces. Canadian Golf Traveller visits nine of the Caribbean’s very best.

Teeth of the Dog, Dominican Republic

One of the world’s elite resorts, Casa de Campo is most famous as the home of Teeth of the Dog, a Pete Dye-designed masterwork unforgettable for its seven ocean-side holes—including the eponymous 16th, a treacherous par three set in a rock cove roughly shaped like a dog’s snapping jaws. Two more Dye-designed jewels, The Links and Dye Fore, complete the all-star golf roster at a 7,000-acre Dominican Republic retreat that attracts a Who’s Who of the social registry and entertainment world. (Read more in our feature story Resorts We Love: Casa de Campo.) A tropical paradise made popular by Brad Pitt, Celine Dion, Robert De Niro and other A-list celebrities, Anguilla is home to CuisinArt Golf Club (formerly Temenos Golf Club), one of the Caribbean’s most graceful and challenging courses. Designed by Greg Norman, golf’s Great White Shark, the course offers invitingly wide fairways, although golfers who spray the ball will pay the penalty in roughs of packed sand and prickly underbrush. Tougher still is playing through the gale-force trade winds almost constantly blowing from the east. On a really blustery day, holding a green on even a short par three demands the surgically precise shot-making ability of the Shark himself. (Read more in our feature story Enjoy Golf With a Gilt Edge in Anguilla.)

A favourite haunt of the cognoscenti for its world-class scuba diving and relaxed expatriate vibe, the Honduran island of Roatan made a splash with the launch of Black Pearl in 2011. Pete Dye and his son Perry carved Roatan’s first course through the rolling jungle surrounding luxuriousPristine Bay Resort. Black Pearl starts almost at the ocean’s edge before climbing into hills covered in palms and gumbo-limbo trees. Visual drama is added by waste bunkers contoured to repel inferior approach shots. A more pleasing distraction is provided by the sweeping ocean views from no fewer than 14 holes. (Read more in our feature story Pete Dye Introduces Golf to Roatan.)

Jamaica’s dramatic northwest coast provides an idyllic setting for Half Moon Golf Club, a classic design by the legendary Robert Trent Jones Sr. at Half Moon Resort, a plush retreat where the high-society guest list has included Queen Elizabeth II and John and Jacqueline Kennedy. Opened in 1961 and renovated in recent years by Roger Rulewich, the lushly tropical layout flows seamlessly through gentle foothills to the east of Montego Bay. Half Moon’s spacious fairways provide inviting targets off the tee. But nasty bunkers and challenging green complexes help stiffen the test at one of the Caribbean’s flagship courses. Opened in 2011, the Caribbean’s newest marquee course curls along rugged bluffs near the popular tourist town of Isabela on Puerto Rico’s northwest coast. Native grasses, sand dunes and craggy cliffs all come into play at a wonderfully natural layout designed as the centrepiece of theCosta Isabela resort and luxury housing community. Architect David Pfaff skillfully flows one spectacular hole into the next, but the best of all—and certainly the most thrilling—is the par-three 17th, demanding a heroic 200-yard tee shot over the crashing ocean to a cliff-top green.

Brilliantly remodelled by top Canadian architect Tom McBroom, Royal St. Kitts Golf Club put the former British colony of St. Kitts on the map of Caribbean golf with its unveiling in 2004. The links-style layout, which McBroom rebuilt on top of a flat and badly irrigated course of the same name near the capital city of Basseterre, includes three thrilling new ocean-side holes on the back nine. Most memorable of all is the par-three 15th, where the green is flanked on both sides with a cascade of bunkers designed to mimic the waves crashing ashore in the background.

Situated near the lighthouse on Aruba’s desert-like northwest coast, Tierra del Sol Golf Course is a 6,811-yard emerald oasis in an otherwise stark landscape of giant cactus and divi-divi trees. Architect Robert Trent Jones Jr. nestled his greens amid the cactus and sun-bleached boulders, while adding marshes as hazards and to provide a sanctuary for local and migrating birds. Herons, egrets and burrowing owls (Aruba’s national bird) are frequent visitors. Far more unnerving are the sizeable lizards seen scurrying across fairways almost constantly buffeted by the prevailing winds.

Dipping and twisting through lush jungle, an abandoned coral quarry and a former sugar plantation, Apes Hill Club is the centrepiece of an eponymous hilltop residential community offering panoramic views of both the Atlantic Ocean and the Caribbean Sea. Launched in 2009, the gorgeous 7,150-yard layout by Jeff Potts and Chris Cole winds seamlessly through a still mostly wild Barbados landscape where chattering green monkeys are often seen feasting on ackee and breadfruit. Especially thrilling are the jungle holes, 11 to 14, a quartet enthusiastically described by Golf World Magazine as “every bit as dramatic and invigorating” as Augusta National’s Amen Corner. (Read more in our feature story Apes Hill Grabs the Spotlight in Barbados.)

This Robert Trent Jones Jr. design at posh Four Seasons Resort Nevis climbs the scenic slopes of Mount Nevis, a dormant volcano rising 3,232 feet from the jungle floor. But distracted golfers will suffer the consequences at a layout that demands steely focus on every hole. The highlight is easily the par-five 15th, the highest point on Nevis‘s only course, where the carry over a chasm from the back tee is a gargantuan 240 yards—and the solace for failure is the island’s best view of the turquoise Caribbean Sea.