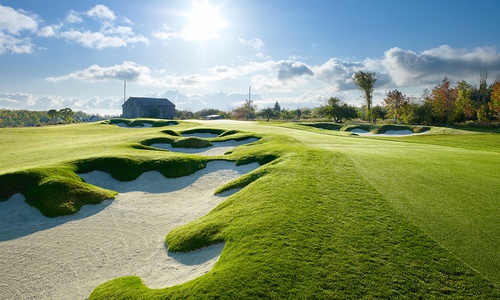 Tom Lehman and Tom McBroom combined their design talents at the Golf Club at Lora Bay, the star attraction of a prime stretch of South Georgian Bay shoreline being touted as Canada’s next great golf destination.

Nothing sells like celebrity, a modern-day reality that helped stamp the Golf Club at Lora Bay as one of Ontario cottage country’s star attractions when it opened in 2006. PGA Tour veteran Tom Lehman teamed with Canadian architect Tom McBroom in building a gorgeous layout that twists along Nipissing Ridge, high above Lora Bay near the town of Thornbury, about a two-hour drive north-west of Toronto. Slowly building momentum, the course rolls with the natural landscape, incorporating old barns and an apple orchard that comes into play on the 14th hole.

Following the example of Whistler and Mont-Tremblant, developers are working hard to make the South Georgian Bay region as well known for its superior golf courses as for the ski slopes at Blue Mountain Resort, one of Ontario’s busiest ski facilities in season. Bateaux Creek Golf Club, Monterra Golf Course, Cranberry Golf Resort and other highly touted courses are drawing golfers to a region experiencing explosive growth. In the town of Collingwood, the area’s central hub, new housing construction has more than doubled in the past decade.

Another big draw are the famous white sand beaches of Wasaga Beach Provincial Park, which have been luring tourists to the area for more than a century.

“With the rapid elevation changes of the Niagara Escarpment and spectacular views of Georgian Bay, this is exciting terrain for golf,” McBroom says. “We might be witnessing the birth of the next great Canadian golf destination.”