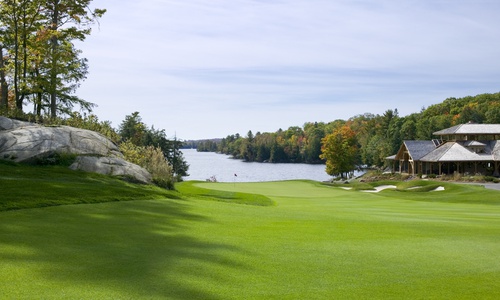 Taking place Sept. 9-11 in McKellar, Ont., PGA of Canada players will be treated to a natural golfing experience unique to this particular area of Canada.

"We couldn't be more excited to take one of our prestigious national championships-the PGA Assistants' Championship of Canada presented by Titleist & FootJoy-to one of the country's most stunning golf regions," PGA of Canada president Gregg Schubert said. "Not only does this championship annually feature some of the most talented players from our association, but it also showcases some of the best courses in Canada too."

The Ridge at Manitou Golf Club in located on 300 acres of land just east of Parry Sound, Ont., however, only 150 acres of land were used by famed golf course architect Tom McBroom to build the golf course. This use of land ensured the rugged Muskoka landscape, which is home to moose, black bears, wolves, foxes, great-horned owls and deer was preserved.

"We are extremely excited at The Ridge at Manitou Golf Club to host the 2014 PGA of Canada Assistant's Championship and look forward to the arrival of Canada's top assistant professionals, The Ridge at Manitou Golf Club's Director of Golf Travis Spiess said. "The golf course is known for its awe inspiring landscape with inviting fairways, rolling greens, exposed areas of rocky Canadian Shield and artful bunkers."

The nearly 7,000-yard golf course was ranked No. 17 on SCOREGolf's 2012 list of the Top 59 Public Golf Courses in Canada and is also a Certified Audubon Cooperative Sanctuary.

Ontario's Billy Walsh looks to defend his championship title after besting the field in 2013 at The Willows Golf & Country Club in Saskatoon. The No.1-ranked player from the PGA of Canada Player Rankings presented by RBC captured his first national championship last September, defeating British Columbia's Lindsay Bernakevitch in a playoff.

The PGA Assistants' Championship of Canada presented by Titleist & FootJoy takes place Sept. 8-11 and is contested over 54-holes (with a 36-hole cut to the low 60-players and ties).

About the PGA of Canada-THE LIFEBLOOD OF THE GAME OF GOLF:

Established in 1911, the PGA of Canada is the second oldest and third largest professional golf association in the world. The PGA of Canada is a non-profit Association comprised of 3,700 golf professionals across the country. The Association's mandate is to develop, promote and support our Members as experts in the game and business of golf and, in so doing, serve both its Members' needs and those of the golfing public through the Association's varied programs and events. The Association consists of the National Office located in Acton, Ont., and nine Zone Offices across the country.